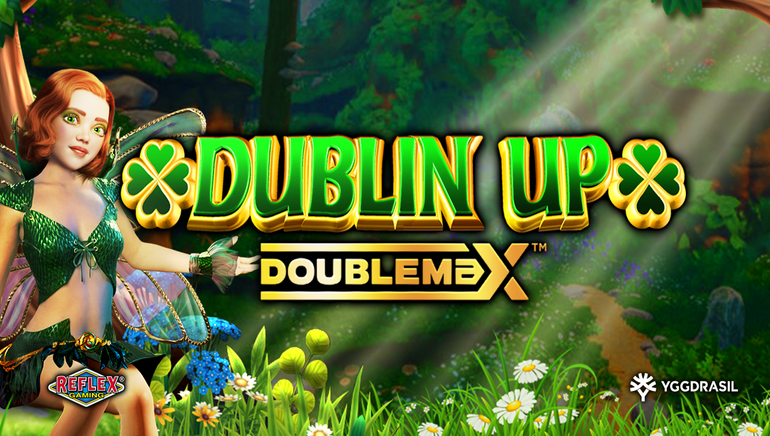 Yggdrasil and Reflex Gaming have announced the international release of Dublin Up DoubleMAX, an amazing-looking slot with original game mechanics.

Dublin Up DoubleMAX is the latest slot available at online casinos, the successful partnership between Yggdrasil and Reflex Gaming. Punters who appreciate lots with an Irish theme will surely enjoy spinning the reels of this game with a 5x3 real structure and 25 pay lines. The game uses Yggdrasil’s proprietary Game Engagement Mechanic (GEM) DoubleMAX™, which has all the winning symbols removed to give way to wild ones being added to the reels.

The original game mechanic envisioned by Yggdrasil for each slot paves the way to potentially massive wins. As the multipliers increase, the sky is the limit and only after a losing spin happens will the counter reset. Free spins are triggered when players discover a minimum of three bonus symbols, as they produce seven bonus rounds. Risk-averse punters will take the winnings, but those who hope for bigger winnings have the option to gamble for twice as much money.

The best-case scenario is to keep growing the multipliers until you hit the ceiling, which can produce a maximum winning of 20,024 times the bet. depending on where you live, you could be able to access the by feature, which takes you straight to the bonus round. users also have the option of starting the Lucky Bet option, which improves the odds of winning the bonus as the bet increases. Dublin Up DoubleMAX is a fun game that can be played on mobile devices, and it is available for both real and plays money.

A Great Accomplishment for Yggdrasil and Reflex Gaming

Yggdrasil and Reflex Gaming have worked together before to release amazing games and this installment is one of the best creations. Recently, their partnership resulted in the Eye of Persia 2 slot, a game that was quickly added to the YG Masters portfolio, powered by GATI. This original technology enables partners to produce outstanding content and then distribute it rapidly across the network.

Stuart McCarthy, Head of Product & Programs at Yggdrasil expressed his satisfaction with the successful release of the most recent slot. He highlighted the potential big wins resulting from ever-growing multipliers and the high volatility of the slot. Mat Ingram, CPO at Reflex Gaming was also quick to celebrate the original nature of the game, the unique graphics, and the popular cascading wins.