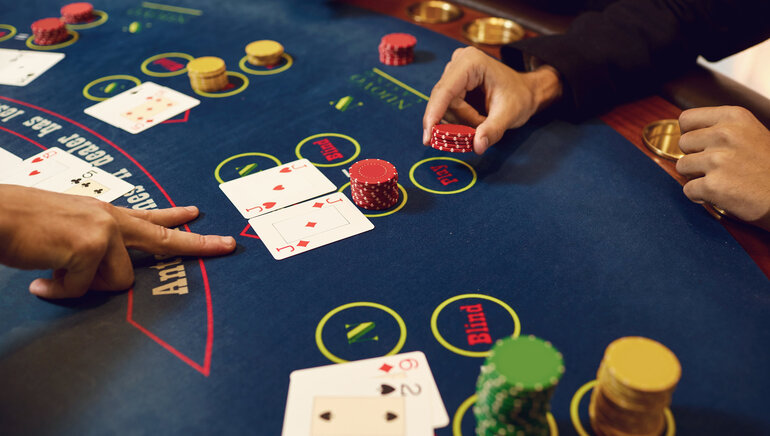 Doubling down is a well-known blackjack strategy, and whether you’re a novice or experienced player, an occasional or frequent player, it’s a great strategy to help you improve your game.

Blackjack is one of the most popular casino games at online casinos and traditional land-based casinos. One reason it’s so popular is that it has a low house edge, as low as .5% when using an optimal betting strategy. Another reason for its popularity is that it appeals to a wide audience—it’s simple enough for novice players to understand and enjoy, but intriguing enough to keep even the most experienced players hooked.

Doubling down is a well-known blackjack strategy, and whether you’re a novice or experienced player, an occasional or frequent player, it’s a great strategy to help you improve your game.

In this guide, we’ll discuss what doubling down is, when you should do it, and its advantages and disadvantages. Don’t play your next blackjack game before reading this guide to doubling down!

Face cards are worth 10 and aces can be worth one or 11—you can decide what your ace will be in each individual hand.

At the beginning of the game, players place their bets. The dealer then deals everyone two cards, but one of the dealer's cards remains face down until the end of the game. The dealer asks if you want to “hit” (get another card) or “stand” (receive no more cards). The dealer usually hits until they get a total of 17 or higher.

If you’re dealt two of a kind, you can choose to split the pair into two separate hands. In other words, if you’re dealt two 7s, you can choose to split them into two separate hands. This doubles your opportunity for winning, and it also doubles your bet, since each new hand is worth the same as your initial bet.

What is Doubling Down?

Strategically, doubling down in blackjack is an opportunity for players to increase the value of their initial bet by 100%. Practically, doubling down means doubling your bet before the dealer deals the third card. In other words, if you bet $5 initially, you can double your bet to $10 in the middle of the game. After you double your bet, the dealer will deal the third card and you are not allowed to request more.

You can also double down if you split the hand, which can end up tripling or quadrupling your bet.

When Is Doubling Down a Good Idea?

There are three scenarios in which doubling down is a good idea. These scenarios are based on probability—while you can’t be 100% assured of a win by doubling down, your chances in the following situations are much higher.

In these cases, it’s impossible to go bust, and at the same time, the dealer is at risk of going over 21 since they need to hit until they reach 17.

When Is Doubling Down a Bad Idea?

If the dealer’s revealed card is an ace, it’s not a good idea to double down, since they have a fairly high chance of getting 21. Additionally, if your first two cards total higher than 11, doubling down is not a good strategy, since you can easily go bust if your third card is a picture card. If you lose when doubling down, you lose double your original bet.

Advantages and Disadvantages of Doubling Down in Blackjack

Knowing When to Stop

One thing to keep in mind about playing blackjack, and any other casino game for that matter, is that the longer you play, the more likely you are to lose instead of win. Casinos know these odds and are designed to keep players playing. Most land-based casinos don’t have clocks or windows so players can’t keep track of time. Plus, they offer free drinks, which don’t do much to sharpen players’ judgment.

Therefore, even though blackjack is one of the casino games with the lowest house edge, the laws of probability mean that the longer you play, the more you stand to lose.

The laws of probability also suggest that if you double down and win big, it’s a good idea to walk away with the money in your pocket. If you continue to play, the odds are that you’ll end up losing a good portion of what you won.

Doubling down is not for the faint of heart. While it's not necessarily a complicated strategy (since there are clear guidelines about when to do so), it still involves putting up a large amount of money. And if you double down recklessly, you’re likely to lose. On the other hand, if you follow the guidelines, you can potentially win a lot of money.

If you’re new to blackjack, you can print out the guidelines so that you can be certain when to double down. If you’re playing online, keep this window open so you can double-check the three scenarios in which doubling down is favorable.

While doubling down can be risky, the potential payout can be large. Double, in fact, than any original bet you intended.